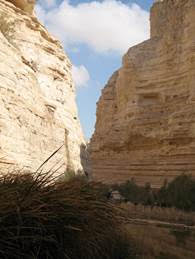 A narrow gorge near SdeBoker in the Negev south of Beer Sheva.
On Tuesday, Israel enters the 2nd week Bein haMetzarim—“Between the Straits.”

“Why are the nations in an uproar and the peoples devising a vain thing? The kings of the earth take their stand and the rulers take counsel together against the LORD and against His Messiah… “But as for Me, I have installed my King upon Zion, My holy mountain.” (Psalm 2:1-2, 6).

Last May 24th marked 50 years (Hebrew calendar) since the Temple Mount (with all of the Old City of Jerusalem) came under Israeli sovereignty for the first time in over 2,600 years. Less publicized was another “50th Anniversary” which took place the following morning, that of the morning in 1967 when Israeli troops arrived at Hebron, to find it festooned with white flags of surrender. For the first time in 2,600 years the Cave of the Patriarchs was also back in Israeli hands. We say “back in”, because the history, indeed, the very identity of the Hebrew people is inwebbed in the fabric of what took place with their ancestors at these two locations. This history extends back to Israel’s great father, Abraham—to her greatest king, David. Remarkably, record of her legal entitlement to these places also extends back to both of these men.

ABRAHAM. It was in Hebron that the LORD appeared again to Abraham (Genesis 18), fellowshipped with him over a meal (6-8), promised to him and his wife Sara a son (10), confided with him as with a friend (17-33), disclosing that this intimacy (knowledge) would extend through his generations, until all that was promised to him was fulfilled. Even the name Hebron (Hebrew: Hevron) is related to the Hebrew word for “friendship”. or a “close connection.” “And it was in Hebron that Abraham purchased for 400 shekels of silver a cave and a field in which to bury his wife Sarah” (Genesis 23)—a place where he, his son Isaac and grandson Jacob with their wives Rebekah and Leah would also be buried.

DAVID. Some 900 years later, it was to Hebron that the LORD sent David to be anointed King over Israel (II Samuel 2:1-4). The seat of his kingdom would remain there for seven years before he took Zion and removed up to Jerusalem (5:1-7).

ABRAHAM. It was to this mountain that the LORD sent Abraham to offer his son as a sacrifice (Genesis 22). And it was on this mountain where “God saw and provided the Lamb.” It was here that He reasserted His covenant (vs 17-18), this time declaring that in Abraham’s seed all the nations of the earth would find blessing (In Gen. 12:3 that blessing had extended to families)—and adding, “—your seed shall possess the gate of their enemies.”

DAVID. And it was atop this mountain that King David 900 years later would purchase the threshing floor of Araunah the Jebusite for 50 shekels of silver and built an altar to the LORD—and where, following his death, his son Solomon would lay the foundation of the house of God (II Samuel 24:24-25; II Chronicles 3:1-3).

“The Gates of their Enemies”

There has been and continues to be a spiritual war over these two places which played such vital roles in the founding history of Israel, roles which, at least in one case, have yet to reach their ultimate fulfillment.

God longs for His people, now returned to their ancient land, to return also into a relationship with their God like that of their father Abraham, who rejoiced when He appeared to him in Hebron in the form of a man, ran to meet Him, and called him Adonai—“Divine Master” (Genesis 18:3; John 8:56). He longs for Israel to recognize the “Son” whom David mentioned prophetically in Psalm 2, the One who will reign over the world from His throne on the Temple Mount in Jerusalem.

Hebron and the Temple Mount are “gates” of recognition, of revelation and glory. But, as occurred in ancient times, both are presently gates in which the Enemy has a strong foothold, and over which there rage fierce battles. One way is by the spreading of falsehoods. For years now, the Palestinian Authority has sought to spread the lie among its people (and the world) that there has never been a Temple or even a Hebrew presence on the Temple Mount. And for Hebron, well—since there is no denying a presence of Abraham, even in its own faith, Islam has simply invented a story that Abraham (or Ibrahim) was the “first Muslim”—one whose covenant promise came through Ishmael—so naturally, Jews, descended from Isaac have no claim to the place where he is buried.

DURING THE PAST TWO WEEKS, EVIDENCE OF THIS SPIRITUAL CONFLICT HAS MANIFESTED IN BOTH PLACES

On July 7th, the United Nations Educational, Scientific, Cultural Organization (UNESCO) declared Hebron, including the Cave of the Patriarchs, as a World Heritage Site of the “State of Palestine.” No mention of any Jewish or Hebrew connection to the site. (This is the first time ever that the UNESCO committee has recognized a significant Jewish religious site as part of the (non-existant) Muslim “state.” Calling the ruling “delusional”, Prime Minister Netanyahu, in rejecting the designation, read before his Cabinet the following Sunday verses 16-19 from chapter 23 of Genesis, and declared, “The connection between the Jewish People and Hebron and the Tomb of the Patriarchs is one of purchase and of history which may be without parallel in the history of peoples.” Of course, some news media were quick to point out that “Attempts to make legal or diplomatic cases based on Biblical accounts are most often ridiculed or not taken seriously.” But this does not change the way the Court of Heaven views the current transactions! Israel currently oversees the Cave, ensuring that both Muslims and Jews are allowed freely to worship there. The Palestinians had railroaded the request (which should have taken months) through, citing a clause that exceptions could be made “if the site were in danger”. The “danger” was Israel’s “occupation.” It was heartening to see US Ambassador to the UN Nikki Haley call the vote on Hebron “tragic on several levels” and “an affront to history”.

Early this past Friday morning, three armed Israeli Arabs came leaping down a passageway from the Temple Mount. At a junction where Israeli Border Patrol policemen were standing, they opened fire from behind, mortally wounding two and injuring a third before retreating from Israeli fire back onto the Mount, running to hide in one of the mosques. In the insuing fire-fight, the three assailants were killed. The two slain policemen were Druze Israelis, Kamil Shnaan (22) and Ha’il Satawi (30). Their funerals came before sundown; Jewish Israel mourned. A heart-rending picture in all Israeli media showed Satawi’s newborn son, born three weeks ago, being nuzzled by his father.

Israel responded by taking the highly unusual step of closing the Temple Mount to all visitors—on a Friday, the Islamic holy day when thousands, if not tens of thousands, of Muslims ascend the mountain for prayers. It remained closed until Sunday morning while Israel searched the Mountain for weapons (it is still not clear how the assailants got their weapons up there); new metal detectors and other security measures are being placed at all entryways.. The “interference with Muslim worship” caused an immediate storm of condemnation from Islamic nations. But as of this writing, the repercussions do not appear to have gone beyond that.

Why did they do it? For analyst, Avi Issacharoff of The Times of Israel,

They selected the most resonant site, on the most resonant day of the week: The Temple Mount complex, on the day of Friday prayers…They knew that a shooting attack at the most incendiary spot in the Middle East would be likely to prompt a major escalation…would gain massive media coverage…an attack, at the incendiary Temple Mount, intended to set the Middle East ablaze. (Emphases ours) 1)

“The most resonant site”…“the most incendiary spot in the Middle East”…the place where an attack might be “intended to set the Middle East ablaze.” This is the Temple Mount. It is indeed an incendiary place. During the past three years, there have occurred a number of events calculated to ignite that blaze. The Enemy is aware of the LORD’s promise in Isaiah 25:7-8 that “on this mountain He will swallow up the covering which is over all peoples, even the veil which is stretched over all nations. He will swallow up death for all time…” He will do what he can to keep that delusive “covering” in place—to keep light and revelation of the true King to Israel and the billions of Muslims in the world from coming forth. Someday a great conflict will break out; and, as has been truly said, the “Last Battle” will be over who will be worshipped on this Mountain!

But these “greater battles” must come in the timing of the LORD. To this point, a Word from a prophetic voice in the city which has been repeated and continues to resonate with us, consists of two words, “Not Now!” God is presently allowing shakings to occur on the Temple Mount, a time of “winnowing” when much will fall to the ground. But the plans and devices of the Enemy for unleashing a great explosion of violence at this time must not be allowed to succeed. We believe that the prayers of the Saints are a means to that end!

* The mercies and redemptive holy purposes of God be released over Hebron and the Temple Mount in Jerusalem. That occurrences in these two holy places be governed by the times and seasons of the Most High.

* That the devices of the Evil One to put off or divert the Holy purposes of God in these places by a release of violence which would result in upheaval throughout the Middle East, that these devices would be bound from being released in the name of Yeshua/Jesus. Declare, “NOT NOW!”

* That a longing awaken within the Jews who have returned to the Land, a longing after the God who showed Himself a Friend to Abraham in Hebron, and Who established David’s throne and authority there; Who filled the Temple on Mount Moriah with His presence; Who will return there to reign, where He “on His holy mountain” He will be ministered to by “all the house of Israel, all of them in the Land” (Ezekiel 20:40).

* Less than 20 years ago, Israel was under a liberal government which, under pressure from the nations, seriously examined the possibility of releasing Israeli sovereignty over both of these sites. Pray that Israel will come to consider as holy these two places integral to her very heritage, which the God of Heaven 50 years ago intrusted back into her hands. Pray that Elohei-Yisrael—“The God of Israel” will guide His people into seeking His counsel in how wisely to administer that charge.

* Pray for the families of the two police officers who were slain at their posts, guarding the Holy Mountain this past weekend. That the “Father of mercies and God of all comfort” would visit and comfort them and direct them into a way of life and hope. Pray for the tiny 3-week-old son of one of the victims…that he will grow up under the protection and grace of the LORD, that he may come someday to say, “Look, this is our God for whom we have waited that He might save us; This is the LORD for whom we have waited.” (Isaiah 25:9).