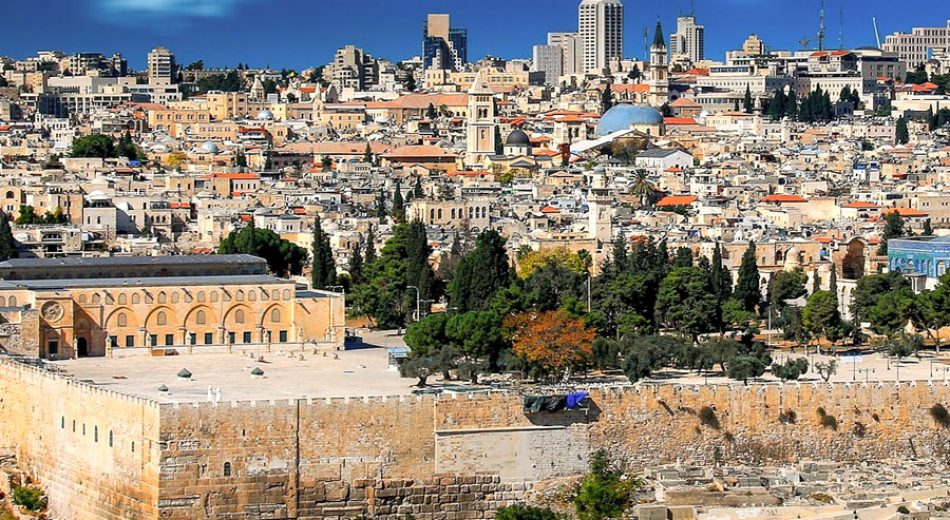 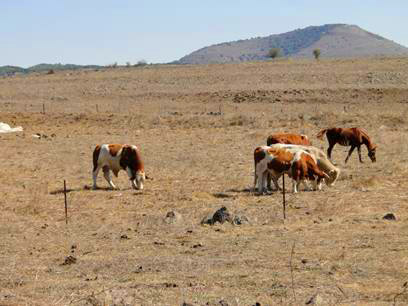 “Bulls of Bashan” feeding in the Golan Heights

Sihon, king of the Amorites, and Og, king of Bashan, and all the kingdoms of Canaan; And He [YHVH, the LORD] gave their land as a heritage, a heritage to Israel His people.
(Psalm 135:11)

At around 5:20 this morning (Monday) a long-range rocket fired from the Gaza Strip landed over 50 miles away on a house in Mishmeret, a village in central Israel just north of Kfar Saba. The force of the blast destroyed the dwelling and injured at least seven people, including two children. This was the farthest attack from the Strip since a Grad rocket fell near Haifa in the 2014 Gaza war. The attack comes a little over a week after two rockets were fired at Tel Aviv, an attack which Hamas claimed to have been a “mistake.” After some 100 aerial attacks in retaliation, Israel agreed to a truce. Prime Minister Netanyahu is presently in Washington D.C. to attend the annual conference of the America Israel Public Affairs Committee (AIPAC), and to meet with President Trump. The prime minister was set to give a speech before the 18,000 person gathering on Tuesday, but in light of the attack in Israel he is cutting short his stay and, after a meeting with the President later today, will return to Israel. He is presently in contact with military leaders regarding what course to take.

For some time tensions have been escalating in Gaza with its de-facto leaders Hamas feuding not only with Israel, but with the Palestinian Authority in the West Bank. And as humanitarian conditions within the heavily crowded Strip have worsened, there have been protests and rioting by its citizens, some of which were brutally suppressed this past week by Hamas. Perhaps as a diversion from its own inner turmoil, Hamas is known to have been preparing a massive violent protest this coming weekend to mark the first anniversary of the weekly “March of Return” demonstrations, which have seen many young Gazans killed or wounded as they tried to breach the fence along the border with Israel.

An unprovoked attack so deep into sovereign Israeli territory, one which caused civilian injury and destroyed property cannot go unanswered. Is Israel to “go in” again to the Strip, as we did in 2014? Perhaps Hamas is desirous that we will…so as to divert attention away from its own domestic woes. And such an operation would no doubt result in many civilian deaths, given the way Hamas uses civilians as shields, which makes for good anti-Israel propaganda around the world.

It is a time of grave testing for PM Netanyahu. With Israeli elections just two weeks away, it seems a terrible time to have to call up reserves and launch a major incursion into the Strip. There is no solidly based unified leadership in place. Netanyahu’s chief opponents in the upcoming elections, a party with three former military generals among their leadership, are already using today’s attack to their advantage, accusing Netanyahu of weakness, of having pandered to Hamas, of being irresponsible in holding the portfolio of Minister of Defense himself, rather than giving it to someone else. Of course, the Prime Minister wants to appear strong. It is a very dangerous time.

As of this writing, it is reported that Israel has deployed two infantry and armored divisions to southern Israel and has begun a limited call-up of reservists in the intelligence and air defense corps. While Egypt has brokered a cease-fire between Israel and Hamas in Gaza (at 10:00 pm Israel time), the situation remains extremely volatile.

* To YHVH Tzevaot—the LORD of Armies—for wisdom and counsel for Israel’s leaders, as to what should be Israel’s response to this attack on her citizens. That the nation will not be dragged into a trap. That any military response be executed surgically and quickly, with as little loss of innocent life as possible.

* That Prime Minister Netanyahu will seek the Lord, that he will be strong and courageous, that he will know what measures to take. That politics and concerns regarding the coming elections will not be major factors in his decisions.

* That the God of Israel will show us what is the decisive answer to the continual violent conflict with the Gaza Strip. Gaza was captured by Israel from Egypt in the 1967 War. We suspect that much can be traced back to Israel’s yielding to the tenets of the Oslo agreement which resulted in the redeployment of most of her troops from the Strip in 1994. Pray that where we have as a nation sinned against God, we would be brought to a place of repentance.

* The Hebrew word mishmeret (the name of the stricken community) means “a watch”—a time and space over which a soldier is responsible to guard. It also means “watchman” or “guard.” Pray for believers in Israel, that we be alert and responsible during this hour in the “watch of the Lord.” over our land and people!

* For salvation for the Arab citizens of Gaza…that they would be able to throw off their Hamas persecutors and pursue a course of peace and prosperity. Pray for revelation of the life which only comes in Yasuah/Jesus. Currently, believers in Gaza are amongst the most persecuted in the world. Pray for dreams and visions and courage to proclaim the truth; for signs and wonders among the believing Arabs there. Zechariah 9:5-7 speaks of a time when the blood will be taken from her mouth [Gaza and all the area of the ancient Philistines], and she “shall be a remnant for our God…like a clan in Judah.”

THE GOLAN HEIGHTS IS PART OF THE SOVEREIGN HERITAGE OF ISRAEL!

“To the “Reubenites and to the Gadites and to the half-tribe of Manasseh, Joshua said, ‘Remember the word which Moses the servant of YHVH commanded you, saying, “YHVH your God gives you rest and will give you this land.”’” (Joshua 1:12-13)

“A day for the building of your walls! In that day the boundary shall be far extended…Shepherd your people with your staff, the flock of your inheritance, who dwell alone in a forest in the midst of Carmel; let them graze in Bashan and Gilead as in the days of old.” (Micah 7:11,14)

This past Thursday, as the Jewish world was celebrating Purim, U.S. President Donald Trump posted a message, “After 52 years it is time for the United States to fully recognize Israel’s sovereignty over the Golan Heights, which is of critical strategic and security importance to the State of Israel and Regional Stability!”

The Golan Heights are a high plateau-like land rising east and north-east of the Sea of Galilee and spans some 700 square miles, with Mount Hermon in the north. In Biblical times, this area was known as Bashan. It was once the domain of a giant being named Og, one of two Amorite kings defeated by Israel before they crossed into Canaan. The land of the other king, Sihon to the south, was bequeathed by God to the tribes of Reuben and Gad, while the land of Bashan was given to the half-tribe of Manashe [Manassah]. Golan, from which the entire area takes its name today, was a community in Bashan designated a “city of refuge” by Moses (Deuteronomy 4:43). Jews lived in the area until it was conquered in the Arab invasion of 636 A.D. The Ottomans then took control from the 16th century until 1918 when the Golan came under French oversight at the end of WW I. When the French mandate ended in 1946, the area became part of the newly-formed Syrian Republic. For the next 21 years, it was often used as a launching site for attacks on Jewish settlements in the Galilee below. Towards the end of the Six Day War in 1967, Israel stormed and captured the Heights; most of the Syrian occupants fled or were driven out, and Israel has occupied and administered 2/3rds of the territory ever since. In 1973 Syria in conjunction with Egypt launched a war to take it back, but was defeated. Israel in 1981 extended law and administration throughout the territory, effectively annexing it—a move which has never until now been recognized by any other nation and which was strongly condemned by the United Nations Security Council.

Syria has chosen to remain officially in a state of war with Israel to the present day. During the ’90s, then-Prime Minister Yitzak Rabin actively worked towards a peace agreement with Syria which would have relinquished at least part of the Heights back into their hands. But these and other overtures did not succeed. With the dissolution of Syria into sectarian violence over the past ten years, the possibility of Israel ceding the area faded. Now, with the recent resurgence of President Assad as leader with the help of Russia and Iran, Israel more than ever sees the necessity for security reasons of maintaining its sovereignty. There are currently over 20,000 Israeli Jews living in the Heights, with a similar number of Druze in the northeastern corner. There are no Palestinian Arabs, as in Judea and Samaria.

Last Thursday President Trump became the first foreign leader to recognize the Golan Heights as Israeli territory. He is expected to sign an order in Washington formally recognizing Israel’s sovereignty later today. We believe that the return of the Heights, along with Samaria, Judea, and Jerusalem, to the custodianship of his returned people Israel is an instance of God’s faithfulness in watching His word to perform it (Jeremiah 1:12). It was the YHVH the LORD who first gave these lands to Israel as a heritage. And it is He who promised one day to return them all to her. Some of that area yet remains for the future, but some has been returned in our day.

In making his announcement about the Golan Heights, we see Mr. Trump continuing, like last year when he declared Jerusalem Israel’s capital, to guide his nation into alignment with God’s purposes for the land and people of Abraham…and with that, he is bringing America into alignment to receive the blessings promised to those who bless them.

* God’s blessing and protection over the decision which Mr. Trump has made regarding the Golan Heights.

* That other nations will break with the U.N. resolutions condemning Israel’s right to the region of Bashan (Golan), and acknowledge her right in wrestling this area from a power which, like Og in ancient times, used it as a base for attacking her. Pray that other nations will align with her sovereign right to it as a part of restored Israel.

* That Israel will never again allow herself into a place of considering the possibility of relinquishing the Golan Heights.

* That God’s “Kingdom Come!” on the Golan Heights. We know of houses of prayer which have been established there. Pray that Jewish and Druze people living there will be granted revelation of the Messiah Yeshua!

* Psalm 133:3 uses the “dew of Hermon” (the mountain rising in the midst of the Golan) as a metaphor for brothers dwelling together in unity, a unity in which the LORD commands a blessing—life forevermore! Pray for the peoples within all of Israel to be drawn into that unity of spirit which can only come in the harmony of the Holy Spirit!