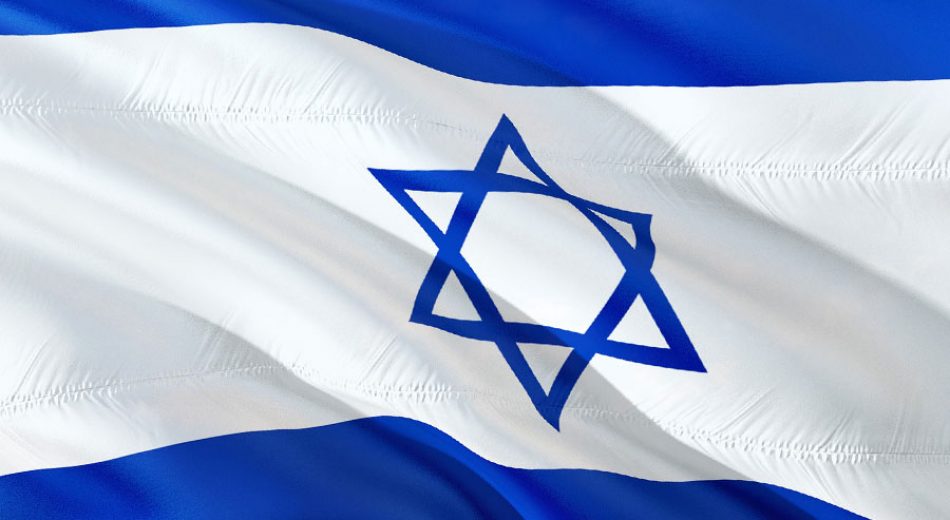 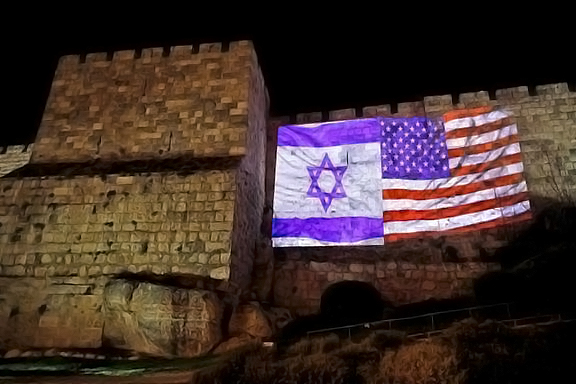 One of many images of united Israeli-American flags projected onto Jerusalem’s Old-City walls on the evening of December 6th while President Trump was delivering his historic address acknowledging Jerusalem as Israel’s capital, and his plans to activate moving the U.S. Embassy there.

1. “IT IS TIME TO OFFICIALLY RECOGNIZE JERUSALEM AS THE CAPITAL OF ISRAEL” –President Donald Trump 6 December 2017

It is difficult to express how deeply moving an experience it was for so many of us last Wednesday evening (shortly after 8:00 pm here; 1:00 in Washington DC) to witness United States President Donald Trump acknowledge publicly to the world in a clear, eloquently measured address, that Jerusalem is the capital city of the nation of Israel.

It was, astonishingly, the first time that this has been done publicly by a foreign head of state— for all that for almost 70 Israel has made her capital in the city, it has been the seat of her government—her Knesset and Supreme Court, the residences of her Prime Ministers and Presidents, many other government ministries. Most past US Presidents (including the last three) have verbalized this during their campaigns, but none officially while in Office. For over 69 years, Israel has remained the only sovereign nation whose chosen capital city was not officially acknowledged by other nations. A mutually countenanced “seal” has remained in place, denying any part of the city to be publicly acknowledged by other recognized national authorities as the capital of the Jewish State. Although an “acting capital” before the world, a game of “make believe” was being forced upon nations to deny that this was really true. In finally breaking this seal on Wednesday, President Trump acknowledged the facade:,

“Through all of these years, presidents representing the United States have declined to officially recognize Jerusalem as Israel’s capital. In fact, we have declined to acknowledge any Israeli capital at all. But today, we finally acknowledge the obvious: that Jerusalem is Israel’s capital. This is nothing more, or less, than recognition of reality. It is also the right thing to do. It’s something that has to be done…I have
determined that it is time to officially recognize Jerusalem as the capital of Israel.”

We are grateful for the courage shown by this leader, in standing before the world and confessing an injustice against Israel by his own nation, in acknowledging what is “obvious” and a “reality”—but also what is the right thing to do (this in the face of societal systems which for the most part have long sense abandoned any concept of universal absolutes regarding moral values)—and in moving in what he considers to be the right (or righteous?) time, even as virtually every other nation is clamoring that it is the “worst of times” for such a move.

We believe this acknowledgment/declaration to have indeed been released in the timing of the Lord. We believe that a door is opened for God’s blessings over the US as a result of this acknowledgment. “For with the heart man believeth unto righteousness, and with the mouth confession is made unto salvation.” (Romans 10:10). This verse reveals a principal of spiritual reality which transcends the application of its context (man’s personal salvation from sin). When a leader whom God has positioned into a place of earthly governmental authority apprehends a righteous way and acts upon it in God’s timing by confessing it publicly, the release of that truth into the heavenlies will result in a release of God’s blessings, His salvation (This “release” may also include the coming-into-array on earth of those armies of which He is “Commander in Chief” (Hebrews 1:14).

Not only were we deeply stirred at the history being made in the President’s speech on December 6th, we were also aware of a holy phenomenon which we have never witnessed before. Throughout the speech, we were profoundly convinced that the man plainly visible behind Mr. Trump’s right shoulder, his Vice President, was fervently praying for his President as he spoke.

The President also declared himself to immediately begin putting into action the 1985 congressional directive towards moving the US Embassy to Jerusalem. Although all have promised, He is the first President since then do so. In designating Jerusalem Israel’s capital, he didn’t designate any borders. He left open the prospect of an eventual peace settlement with Palestinian Arabs living there. “We are not taking a position of any final status issues, including the specific boundaries of the Israeli sovereignty in Jerusalem, or the resolution of contested borders. Those questions are up to the parties involved.” He also said that “The United States remains deeply committed to helping facilitate a peace agreement that is acceptable to both sides…The United States would support a two-state solution if agreed to by both sides.” We would observe, and we believe it significant, that in mentioning “two-state solution” Mr. Trump did not verbalize the other side of that mantra, “dwelling side by side.” To our minds, that would be what brings a curse—side-by-side requiring a Muslim state in the heartland, Judea and Samaria, which God forever promised by covenant to the descendants of Jacob–Israel.

It is remarkable the hostility which President Trump’s announcement resulted in throughout the world. Only officially connecting the name “Israel” to Jerusalem, without even demarcating lines, only connecting the name, awakens fury. And not just among Muslim states, leaders of the large nations in the EU, France and England, were immediate in voicing their strong displeasure. Out of the midst of this, the Czech Republic alone stood up, and in the wake of Washington’s announcement, itself also publicly acknowledging Jerusalem to be the capital of Israel (within pre-1967 lines it is true, but still aligning itself with the presence of a Jewish alignment which God has Himself made with His holy City!).

We are so grateful for your prayers!

…for our, and Israel’s security during the aftermath of President Trump’s announcement! We have been safe, as, for the most part, has been Jerusalem—even during the three-day “Days of Rage” and following Friday prayers in the Aksa Mosque on the Temple Mount, when it had been feared they would most likely break out. Indeed, we believe the dragon on the mountain has remained bound through the intercession of God’s people!

The world-aflame which so many nations had warned of after the announcement has so-far failed to materialize. There were isolated incidents, which media in many cases seemed to go out of their way to film and blow up as being prevalent. But in truth, the violent reaction has so far been very minimal, especially in Israel. Yesterday, a lone attacker stabbed a guard at a Jerusalem train station. Please pray for this man, Asher Elmaliach that he would live and not die! But the intifada called for by Hamas hasn’t materialized. The largest denunciations have come from several western European capitals and Turkey.

On Wednesday, the President closed his speech with an unusual blessing. The writers do not remember hearing a President in a public address call on God to bless Israel…

* Thanksgiving for the blessing released last Wednesday through the US public
acknowledgment of Jerusalem as being the capital of the nation of Israel.

* Protection for President Trump and Vice President Pence from spiritual and physical
attack for their stand.

* That the resolve of both of these men will not be shaken, rather that it will be strengthened, and further enlightened by the Holy Spirit regarding Israel. That they will seek God’s counsel regarding their actions towards that nation. That they will not be deterred by the anger from the nations and the threats made for having stood for what they see to be right.

* That the Czech Republic be blessed for their stand with Israel. That other nations follow their lead, and pull apart from the flow seeking to perpetuate a breach between Israel and her rightful place of government.

* That Israel and Jerusalem will continue to be protected from violence related to the President’s announcement regarding Jerusalem.

* When a nation stands with Israel, they acquire that nation’s enemies. Pray for divine protection for the US from Magen Avraham—the “Shield of Abraham” (Genesis 15:1).

* Peace over Israeli and Palestinian Arabs, that they not be ignited into violent hatred by Islamic forces which would like to capitalize on this declaration. That a message would go out to them of hope and a future in dwelling peaceably with their Jewish neighbors. That the light of the Savior of all flesh will illumine them to His salvation.

We continue to hear of this Hebrew year 5778 as being prophetically a year of gates and doors (The Hebrew letter-number for “8” is the letter het, which is shaped like a door and often used to symbolize that).

Doors are important in Jewish thinking. On our doors we place a mezuzah, a little box with the following inscribed on a piece of parchment inside:

THE VOICE version of the Bible translates verses 8 and 9 like this: “Do whatever it takes to remember them [God’s words]: tie a reminder on your hand and bind a reminder on your forehead where you’ll see it all the time, [place it] on the doorpost where you cross the threshold or on the city gate.”

This is Hebraic thinking: On your gates remember this: Love your God with everything! I feel in this year of gates and doors, we would do well to carry these mezuzah-verses in our hearts!

In the Hebrew Scriptures, gates and doors are sometimes significant for what took place within them:

* Genesis 18:1. “Then the LORD appeared to him (Abraham) by the terebinth trees of Mamre, as he was sitting in the tent door (Hebrew: “opening”) in the heat of the day.” The doorway was a place where God appeared.

* In Exodus, the Hebrews were instructed to put blood on their doorposts and lintels, so that when the LORD passed through the camp in judgment, He would skip over their homes. Doors may be a place of redemption.

* Deuteronomy 16:8. God commands the Israelites to appoint judges at their gates who will judge the people with justice. In Proverbs 31 we read that the elders of the land sit at the gates. Gates are places of authority.

* Jeremiah is told (Jeremiah 19:2) to go out to a gate and to proclaim the words God tells him. Gates are places of proclamation.

* Genesis 22:17: “Your descendants will possess the gates of their enemies. Isaiah 28:5-6: “In that day the LORD of hosts will be…for strength to those who turn back the battle at the gate.” Gates are places of warfare and victory!

Gates and doors are places of guarding and exercising discernment (II Chronicles 23:19); places of thanksgiving and praise (II Chronicles 31:2); and places of encounter with God, both on Earth, (Genesis 18:2) and in Heaven (Genesis 28:19)! The Book of Proverbs repeatedly warns us that gates may also be places of temptation to sin. Certainly, we must be alert at all gates we are faced with in our lives!

In 5778 we will see many gates opening on both personal and national levels. We are already experiencing that here in Israel. Since Israeli believers welcomed the nations at the “Welcoming the King of Glory” conference two months ago, we and other Israeli leaders have found many gates in the Spirit opening or already opened in Israel! We believe that President Trump himself opened a gate this past week, a blessing for his own nation and for Israel, as he honored Jerusalem by publicly acknowledging her to be what God has from the beginning established and raised her up top be. Unfortunately, many nations took this gesture as a signal to close their doors to this blessing. I sense we need to be alert at the doors of our homes and cities, and also to declare His Kingdom with new confidence. With expectation of victory, encounter, redemption and authority let us focus on our gates. And let us love the LORD with our ALL…our energy, finances, time and gifting!