Posted in Featured Articles on November 13, 2019

Early Tuesday morning, an IDF fighter plane fired a single rocket through the bedroom window of a house in Gaza City where Baha Abu al-Ata and his wife were sleeping, killing them instantly.  Abu al-Ata was the commander of the military wing of the Islamic terror group Islamic Jihad.

Although Islamic Jihad is the smaller of the two primary Palestinian terrorist groups operating in the Gaza Strip (the group maintaining ultimate control is Hamas), it actually enjoys direct Iranian backing both financially and militarily and has acquired an arsenal of rockets and missiles equal to that of Hamas.  It has proven the much more aggressive of the two factions, and has for some time been seen as “the driving force in rocket fire and confrontations with Israel.”  Last May it sent a barrage into Israel just before the beginning of the Eurovision Song Contest in Tel Aviv.  During August, it was responsible for a barrage of rockets aimed at the city of Sderot in which a children’s festival was taking place attended by 4,000 people.  More recently, on September 10th, just before the national elections, it fired two rockets into Ashdod where Prime Minister Netanyahu was in the midst of a campaign speech being broadcast across the nation; he was forced to be rushed offstage until the all-clear.  Abu al-Ata was behind these attacks and many, many more, and is known to have been in the process of planning much larger ones. 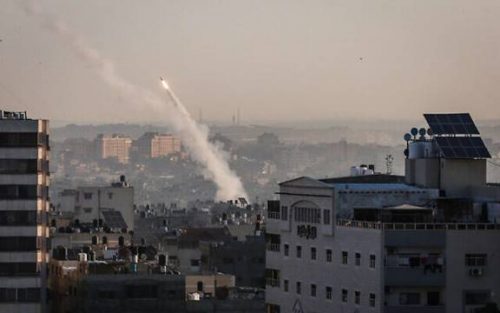 An early-morning rocket headed for Israel from the Gaza Strip

Since his elimination, over (as of this writing) 400 rockets and other projectiles have been fired into Israel.  This past week, for the first time since the 2014 war, schools were ordered closed in southwestern Israel and even parts of Tel Aviv.  The Israel Defense Force has been pounding areas of the Strip from the air, and tanks and other military vehicles have lined up along the border.  So far, Hamas appears not to have been involved—it is thought that they do now want a major confrontation with Israel right now, but may be incapable of reigning in Islamic Jihad.  Earlier today they threatened to enter the fray if Israel doesn’t stop their retaliatory attacks.  If Islamic Jihad does indeed have a stock of larger, longer-range rockets, capable of hitting central Tel Aviv, the airport, or even Jerusalem, an eruption could take place which might quickly draw Israel into all-out war.  It comes at a bad time, of course; Israel continues in a weakened state in an old interim government, because the past two elections have failed to bring a new one into place.

Yesterday (Tuesday) morning at 11:00 Israel Time, Naphtali Bennet, a 47-year-old MK of the New Right party was appointed Israel’s Minister of Defense.  The portfolio has been held by Prime Minister Netanyahu himself for the past 3 ½ years.  The appointment was seen across the board as a political maneuver by Mr. Netanyahu, and there can be little doubt that it was.  However, Bennet is not a new-comer in governmental circles.  In previous governments, he has served as Minister of Education, of Diaspora Affairs, of Economy, and of Religious Services.  During the 2014 Israel-Gaza conflict, he was a member of the security cabinet in which he quitted himself well.  One op-ed writer pointed out the close friendship Bennett has with Brig. Gen. Ofer Winter, who has served as Netanyahu’s military secretary and has the prime minister’s trust, and who might be a source of support and counsel to the new Minister.  We would also point out that both Bennett and Winter confess a faith in Israel’s God—which has too often not been the case with Israel’s governmental and military leaders.

Bennet is being thrown into this incredibly important position at a time of great security upheaval and danger for Israel—a renewed and accelerating menace from Iran, both in their renewed development of military nuclear capabilities, and their setting up of military proxies in Syria and Lebanon; the unravelling of military alliances in Syria, including the departure of US forces; and now the eruption of Islamic Jihad and quite possibly Hamas in Gaza.  Bennett was, of course, briefed on the plans for eliminating Abu al-Ata the night before they were carried out and he was sworn into office.  He sits in the most powerful ministry seat in the land, just beneath the Prime Minister—and all acts of the Chief of Staff and military are answerable to him.

Earlier today, as I was stirred with a sense of the importance of particular prayer for this man right now, I felt the Lord leading me to several passages of Scripture, including two which bear his name, Naphtali:

First:  I Samuel 17:45.  When facing Goliath, David declares that he comes in the name and under the authority of YHWH Tzevaot Elohei Ma’archot Yisrael—“LORD of Armies, God of the Armies of Israel.”  This last phrase is more literally: The God who Places Israel in Array—That is, Who positions each member of the army into His or Her Place.”   Israel’s God is her Commander in Chief.  He is a God “Mighty in Battle.”  It is He who chooses who is placed in what position in His army in Israel—both her spiritual army and her physical army.

* He is well aware that Naphtali Bennett is now in a position of power over all the physical forces in modern Israel.  We must be aware of that, and hold Him up to His Commander in Chief.

Second:  Genesis 49:21.  When blessing his sons at the end of his life, Jacob has this prophetic word over Naphtali:  “Naphtali is a Doe let loose; He gives beautiful words.” (NASB)

* As Naphtali Bennett is “let loose” into this position (which he has many years longed for), pray for his tongue.  That he will give directives in wisdom, integrity, authority, and timing.

* That his words will be lucid, clear…nourished by true integrity and wise counsel, not his emotions.  Pray that he will humble himself and seek the counsels of His God (Psalm 33:11).

Third:  Deuteronomy 33:23.  From Moses, 440 years later, when blessing the tribes of Israel at the end of his life:  “O Naphtali, satisfied with favor, and full of the blessing of the LORD.  Take possession of the sea and the south!”

*  Pray that Naphtali Bennett will not find his satisfaction in the favor of his followers or in his ambitions—but in the favour accorded him by his God, the God over all the Armies of Israel—who appointed Abraham, and Joshua, and David to similar positions before him.

*  Pray that Israel’s new Minister of Defense will desire and be filled with the blessing of the Lord.  That he will, like David,  read the Scriptures, that his delight is in the instruction (Torah) of the Lord, from which is promised a blessing! (Psalm 1).

*  “Take possession of the sea and the south!”   This past week a Russian submarine was apprehended lurking within Israel’s territorial waters.  And the attacks from Gaza are repeatedly referred to as the “onslaught in the South.”  We are not convinced that this is the time for a military “re-taking” of Gaza.  But from Naphtali Bennett’s new position, this land in southern Israel and its coastline fall under the territory over which he is militarily responsible.  Please Pray that he is given divine guidance in bringing, maintaining, enforcing peace and safety over Israel’s borders—both in the seas and the land.

Please Pray:   For Naphtali’s wife Gilat, that she will be a strength and encouragement to her husband in his new positioning.

Please Pray:  For General Aviv Kochavi, Chief of Staff of the Israeli Forces.  That there will be God’s favor over and harmony within the relationship between the Minister of Defense and the Chief of Staff—that they will respect each other, listen to each other…and both seek to be led by the Counsels from above.

Please declare: the God “who maketh peace in His high places” will have mercy on Israel…”He who watches over Israel neither slumbers nor sleeps”…that He will not allow a major war to break forth in Israel outside of His timing.  That plans of the enemy to bring about death and destruction among both Arabs and Jews in His covenant land will be thwarted by the Most High!