From ancient times, the 9th day of the Hebrew month Av—Tisha B’Av–has been observed as a fast day (it is mentioned as the “fast of the fifth month” in Zechariah 7:3-5, 8:19). If the 9th lands on a Sabbath, it is then observed on the 10th of Av. This culminates a three week mourning period beginning on the 17th of Tammuz that commemorates the destruction of the Temple in Jerusalem by the Babylonians in 586 B.C.

In Jewish tradition, as well as recorded history, many other calamitous events have taken place on or near that date:

In more modern times, the following has happened:

This is only a small selection of dire occurrences on this date. It seems that forces of darkness are stirred to increase their activity against the Covenant people at this time. We believe it is important to pray for God’s watchful protection over His people (Psalm 121) during this season.

Please pray for “Magen Avraham”—the shield of Abraham (Genesis 15:1) to be over all the seed of Abraham, Isaac and Jacob. Pray that Angels watch over and protect those “who will inherit salvation” (Hebrews 1:14).

Because of these events, this has for many become a season of fear and superstition, especially these last nine days “between the straits.” 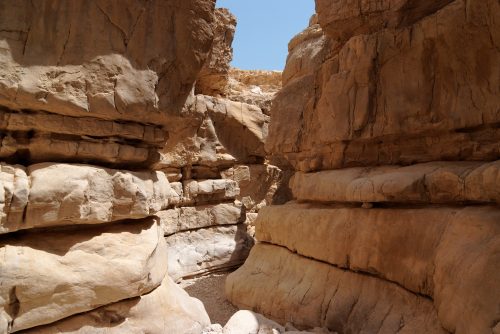 “Between the Straits”–A narrow gorge in the Negev south of Beer Sheva.

Please pray Numbers 23:23: “For there is no sorcery against Jacob, nor any divination against Israel.” Pray against superstition, but that Jews would be led to submit their spirits into the hand of their Redeemer, realizing that their times are safe in His Hand! That in the light of His face, they are delivered from the hand of their enemies (Psalm 31:5, 15-16).

On this day, many religious Jews seek to meditate soberly upon the destruction of the First Temple. We believe this to be right and good. Yet, before the burning of that beautiful building, something much more terrible had occurred. First Samuel 4:21 tells of a day some 450 years earlier, when the Ark of God had just been stolen, and the dying wife of one of the slain priests gave birth to a son, who was given the name Ee-Khavod (Ichabod)—“without glory” or “the glory is departed.” During David’s reign, the Glory was returned. Now in 586 BC, Jerusalem had fallen and the Temple was destroyed. But what was incomparably worse had taken place sometime earlier, when the very Glory of the Presence of the LORD—the Glory whose presence had made the building holy—had again departed, leaving behind a defiled and empty shell (Ezekiel 10:3, 18-19; 11:23).

But that Glory is going to return when the One who is “the radiance of His glory and the exact representation of His nature”(Heb. 1:3) is recognized and received! In Zechariah 2:5 the LORD declares, “For I will be a wall of fire around her (i.e. Jerusalem), and I will be her glory within!”

A prayer recited in Synagogues from the Siddur reads, “Our eyes shall behold Your return with mercy to Zion. Blessed are You, LORD, that brings back His divine presence to Zion”

–That the Glory of the LORD will return to Jerusalem—that His Spirit will awaken a longing for that glory in Jewish hearts—and revelation so that He will be recognized and received when He comes.

–Pray that the day hasten when “The fast of the fifth month…shall be joy and gladness and cheerful feasts for the house of Judah!” (Zechariah 8:19).

Martin Sarvis and wife Norma have lived in Israel almost 20 years. Along with writing and speaking engagements abroad, they help lead the Succat Hallel prayer house in Jerusalem. Their weekly Torah Portion and Israel Prayer Update contributions can be found on the MJBI website under “Resources”