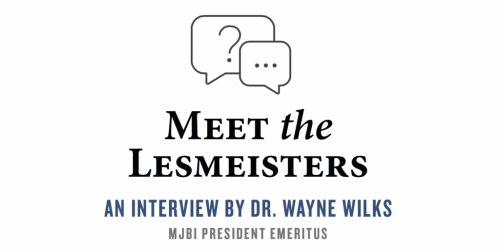 I am so eager for you to get to know Nic and Tabatha Lesmeister more personally.  Bonnie and I have had the great joy of walking closely with them over the past six years. They are a dynamic young couple that God has clearly called to lead MJBI into the bright future ahead! I interviewed Nic recently, and am excited to share that with you here.

Every good story starts with a love story, so how did the two of you meet?

In 2006, I was living in DFW, attending Shady Grove Church and studying full-time for my Bachelor’s degree in Economics from the University of Texas at Arlington. My roommate at the time, Marvin Slaton, told me about this young woman from Tyler, Texas, who he thought I might be interested in. On New Year’s Day 2007, I went to a party at Marvin’s sister’s house – Melissa Herring. Melissa was Tabatha’s youth pastor and friend. I spent most of the night bashfully avoiding Tabatha, as I was too afraid to talk to her. I didn’t think I had a chance in the world with her! Finally, as Tabatha was about to leave, Melissa grabbed me and pulled me in to talk with her. One year later in that same living room, I asked her to marry me. We were married in Tyler on a humid day in June 2008.

You and Tabatha come from very different backgrounds; tell us about that.

I grew up in a devout Catholic home in a small Western Minnesota farm town. Tabatha was raised in East Texas in an Assemblies of God family. In fact, her grandparents were legendary A.G. missionaries to India and Southeast Asia. As an infant, her father was held and blessed by Mother Theresa! Tabatha grew up in church, knowing Jesus her whole life. I came to faith when I was 19 in a library in Fargo, North Dakota, and had a personal, supernatural encounter with Jesus that radically changed my life. From there, I moved to Virginia and enrolled in a two-year discipleship Bible school. After graduation, I moved to the Dallas-Fort Worth area in the fall of 2005 and enrolled at UTA to finish my bachelor’s degree. Tabatha went to the University of Texas in Austin out of high school, and then finished at UT Tyler with a degree in education.

When did you first connect with MJBI?

Sometime in 2004, when I was in Virginia at Bible school, MJBI came to our church and presented the “to the Jew first” message with Don Finto. It was like scales came off my eyes when the Holy Spirit showed me God’s plan for Israel and the Jewish people. I was so moved that I started donating $10-$15 per month to MJBI. I frequently received hand-written thank you notes from you (Wayne), and was so impressed by this. Later, after moving to DFW and going to Shady Grove, I became even more familiar with MJBI. In fact, one of the first real formal dates that Tabatha and I went on was an MJBI banquet at the Hilton Anatole in 2007!

After you and Tabatha were married, you started a very successful career in business. Tell us more about that.

I took a low-paying job right after I graduated from UTA in the spring of 2008. It was a start-up business in the financial sector, and I came on as the operations manager for a friend of a friend. This gentleman and I really hit it off, and our business grew 2-3 fold as the economy tanked in 2009. Eventually, I was given partnership in the company.  Both my business partner and I had a great heart for missions, and giving to Jewish ministry was always a priority for us. We believe that God blessed us with his Genesis 12:3 promises as we gave away the wealth He so kindly gave us. Over the course of seven years, we built, bought and sold multiple small businesses. I ended up selling out of the three major ones I had ownership in from 2013-2014. All along the way, we always gave “to the Jew first” by giving to MJBI. I truly believe we were blessed because of this.

After selling your businesses in 2013/2014, you then moved to Jerusalem as a family. Why?

We bought some land outside of Tyler in January 2013, and built a small house in the spring of 2014. Right after we moved in, we took our first trip to Israel. While there, we felt the Lord put an opportunity before us to move to Jerusalem so I could earn a one-year Master’s degree from The Hebrew University – the “Harvard” of the Jewish world. Without the distraction of work, we took a year off as a family and loved every minute of it. It just happened to be my seventh year in business, the seventh year of our marriage, and a seventh (shemitah) year in Israel! God connected us with so many great people in the Land, and we both count many of them as some of our closest friends today.

Something special happened when you were living in Israel. What was that?

When we moved to Israel in October 2014, our first born – Naomi – had just turned 3. We wanted to have another child, but the move to Israel really threw our plans into a spin. Right after I started classes for my Master’s degree, Tabatha found out she was pregnant. The Lord gave us a son who was born in downtown Jerusalem in the summer of 2015. We named him Avi, which is short for Abraham and a very common name in Israel. He was the amazing “cherry on top” of our incredible year in Jerusalem!

What are some of the books you’re both reading lately?

Tabatha and I have slightly different tastes in reading.  She is an avid book reader, and I’m more of a novice. I find myself reading blogs and long articles online more often. That being said, my favorite book of the past year was Catch the Jew by Tuvia Tenenbom. It’s a funny, yet blunt look at the Land of Israel and the Israel-Palestinian conflict. Tabatha greatly enjoyed Joel Richardson’s When a Jew Rules the World this past year. It presents one of the best high-level overviews of Israel, the Church and the last days. She recommends it to almost everyone!

The journey you’ve both taken has been so inspiring to me. What are you most excited about in this season of leading MJBI?

We both have a burning passion for the restoration of Israel. We’re particularly burdened to teach younger generations of believers the truths about God’s covenants with the Jewish people. The opportunity to lead MJBI is something we take very seriously. There is such a beautiful, wealthy heritage that has been built through MJBI’s ministry in the restoration of the Jewish people around the world. It’s our desire to continue to expand this ministry in modern, relevant ways. To be called into Jewish ministry as Gentiles is an incredible honor. I love to say “the best is yet to come” because I truly believe miraculous, amazing days are ahead of us in Jewish ministry!

Dr. Wayne Wilks is the Executive Pastor of Jewish Ministry at Gateway Church. He also continues to serve as an MJBI board member and President Emeritus.