Posted in Counting the OmerJewish Holidays, Shavuot, on June 8, 2016

“One, two, three … forty-eight, forty-nine, FIFTY!” One of my favorite childhood games was hide and seek. It was all about building anticipation by counting to an agreed upon number, and then the thrill of the search for hidden friends—culminating in the absolute exhilaration of joyful discovery for both parties. The biblical Feast of Weeks carries the same sense of mounting anticipation except this time the feeling of expectation is intensified even more by counting numbers measured in days rather than mere seconds.

While all seven Feasts of the Lord are directly related to the celebration and observance of appointed times set apart by God, only the Feast of Weeks is named specifically after the idea of counting time itself. The first words in the Torah concerning the Feast of Weeks say, “And you shall count” and the following verse repeats the idea, saying “Count fifty days” (Leviticus 23:15-16).

The prayer of Moses as recorded in Psalm 90 has this truth embedded within it—“so teach us to number our days so that we may gain a heart of wisdom” (Psalm 90:12). The annual cycle of the biblical feasts is a perpetual reminder that time is a gift from God. When we count it rightly, and value the times and seasons He has ordained for us, we will live in the reward of intimate knowledge of Him.

As the middle of the three pilgrimage feasts—when all the men of the nation were to appear before the Lord in Jerusalem—it is clearly an independent one (Exodus 23:16). At the same time, the Feast of Weeks is inextricably tied to Passover by counting the days between the two feasts. Therefore, to some extent it is the culmination of Passover.

Through marking the fifty days in-between celebrations, we see that the Feast of Weeks is one that is not only to build anticipation but also a season of time to link two realities together. In the Scriptures the number two speaks of witness and testimony. For instance, two witnesses establish a truth. Let’s quickly look at the themes of two names, two loaves, and two mountains found in this feast.

The various names of the feast actually take their cue from the language of the verses mentioned above in Leviticus 23 as well as the written languages of the Scriptures. The Hebrew name of the feast is Shavuot, which means “weeks” and refers to counting seven weeks plus one day from Passover to establish the time of its observance. The Greek name of the feast in its Anglicized form is Pentecost, which means “fifty” and refers to counting fifty days between Passover and the Feast of Weeks.

Over the course of history, the two names of the feast in their respective languages have become indicative of a difference of emphasis between Israel and the Church, but I believe that when we bring the two together from a Messianic Jewish perspective, we gain a fuller picture of the significance of this feast.

Today in Judaism, Shavuot is the celebration of the giving of the Torah to Israel on Mount Sinai by the hand of Moses (Leviticus 26:46). Fifty days after crossing the Red Sea, when they came out of Egypt, the tribes of Israel were assembled at the foot of Mount Sinai. In receiving the Torah, the nation of Israel was birthed (Exodus 19:6). Deliverance from the bondage of Egypt came so that the tribes of Israel could be freed from their slave identity in order to receive the teaching of the Lord, which was the revelation of His character, nature, and ways.

For much of the Church world, the Feast of Pentecost is the celebration of the outpouring of the Holy Spirit upon the early believers in Jerusalem fifty days after the resurrection of Yeshua, as recorded in the second chapter of Acts. On the very same day—once again surrounded by miracles, signs and wonders—the followers of Yeshua were gathered in one place, empowered to carry the Word of God to every nation in the power of the Holy Spirit. Thus, the international Body of Messiah was born that day!

After counting the weeks and days leading up to Shavuot, the only other specific instruction on how to observe the holiday is a peculiar one! It has to do with the offering that was to be brought from each home and given to the priest to wave before the Lord. The prescribed offering was two loaves of leavened bread. In light of the connection with Passover (the Feast of Unleavened Bread) and the preceding wave offering of unleavened bread on First Fruits, which took place during the days of counting, the two loaves of leavened bread particularly stand out. Adding to the peculiarity of this Shavuot instruction, there are specific Mosaic laws that state no grain offering should have leaven in it (Leviticus 2:11).

Yet, at Shavuot the Lord commanded two loaves of leavened bread to be waved before Him by the priests. We already discovered that Shavuot speaks of both the birth of the nation of Israel and the birth of the international Body of Messiah. Could this wave offering be a foreshadowing of the mystery of the one new man of Ephesians chapter two, coming together by the Word of God in the power of the Holy Spirit? Leviticus 23 says it was to be an offering purified by fire and made holy for a sweet smelling aroma to God.

The mountain top locations of the two most defining Shavuot moments in Scripture are Sinai and Zion. The parallels between them are astounding! Not only do the events share the same date on the biblical calendar, but they are both preceded by equally powerful days of preparation in anticipation of the historical encounter between God and His people. Much has been said by way of comparison between what happened in Exodus 19-24 when Moses met with God on behalf of the people on Mount Sinai and the one hundred and twenty disciples in the upper room on Mount Zion in Acts 2. There are many similarities related to being gathered in unity. We see the manifestation of the presence of the Lord in glory and power, which brings fresh revelation of who He is! All of this enabling us to boldly go forth declaring His name to the Nations!

There have also been comparisons made of the differences between the outcomes of the two encounters. I was recently reading Hebrews 12 and saw for the first time that it isn’t simply an issue of comparing Shavuot and Pentecost. In reading Hebrews 12, I realized that the perspective of that passage is written from a heavenly viewpoint looking down at the mountain. Whereas Exodus 19-24 is written from a viewpoint of looking up from the foot of the mountain where the nation was waiting for Moses to return with the words of the Lord.

I believe that in this season of counting the days leading up to Shavuot/Pentecost, the Lord is bringing together the two perspectives of names, loaves, and mountains to release a fuller and clearer picture of His plan for the complete restoration of the whole world through Israel and the Church! 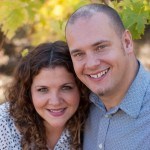 Matthew Rudolph is International Director of Gateways Beyond International. Matthew is a Jewish believer in Yeshua whose heart burns for God’s glory to be seen in Israel and the nations. Experiences gained from growing up in places like India, Europe, and the Middle East have given him a broader understanding of the heartbeat of God for the nations. Matthew serves on the apostolic team of Gateways Beyond International, which is a family of Messianic missional communities with ministry bases in Cyprus, Switzerland, Germany, and the United States. He and his wife, Serah have two beautiful adopted Ethiopian children.