This scripture emerges in this new season of 2015: “They triumphed over him by the blood of the Lamb and by the word of their testimony; they did not love their lives so much as to shrink from death” (Revelation 11:12).

There are believers who are experiencing the strength of this passage written by the apostle John on the island of Patmos in real life. With the rise in persecution and slaughter of Christians globally, a new breed of warriors is emerging whose foundation is based on the above passage.

Statistics from 2014 are not available yet; but according to Open Doors, a non-denominational group supporting persecuted Christians worldwide, instances of Christians martyred for their faith world-wide doubled in 2013 from the year before, with the largest number coming from Syria. Open Doors places North Korea, Somalia, Syria, Iraq, and Afghanistan at the top of the most persecuted Christians’ list.

With 2.2 billion followers or 32 percent of world population, Christianity is the largest and most widely spread faith movement in the world. It faces some form of hostility in 111 countries such as attacks on churches, schools, sexual assaults, discrimination, threats, and expulsions. Christians in North Korea face the highest imaginable pressure with 50,000 – 70,000 in political prison camps.

TheChristians.com online magazine recounts the story of an Iraqi woman, Khiria Al-Kas Isaac, who recently defied ISIS terrorists when they demanded that she convert to Islam or be beheaded. With the cold, silver knife at her neck, she replied that she would rather die than give up her Christian faith. She didn’t flinch, using the Lamb’s blood and her testimony. She loved not her life unto death! Her tormenters eventually relented—only robbing and then releasing her. Many others, among them innocent children, have not been so blessed, succumbing to the most heinous tortures and deaths.

Blood chilling stories like this bring home the strength of the scripture in Revelation.   Without the Lamb’s blood, we have no testimony. Loving not our lives unto death is what we cannot see in the dark. We don’t know until the moment we are tested if we will carry this out in reality. What I do know, personally, is this scripture is a bullet in my arsenal. It is what causes me to overcome.

Yeshua also left us with great comfort with this passage: “I have told you these things, so that in me you may have peace. In this world you will have trouble. But take heart! I have overcome the world” (John 16:33).

As we enter 2015, I am filled with great joy knowing that God has numbered my days and has prepared me for each event in life. We take our places as good soldiers, arming ourselves with the Lamb’s blood, our testimonies, and loving Him more than life.

This month I will be in Ethiopia, Ukraine, and Israel—three countries that have seen the reality of recent suffering, anti-Semitism, death, and persecution. While Christians worldwide experience suffering, Jewish communities are under pressure as well. Truly, the hope of the Messiah is our anchor.

This season makes the mandate of the MJBI even more exciting and critical to the times. The Jewish world awaits its Messiah, and you play an important role. Please give a generous gift this month as we go forward with our calling to train, teach, and touch Jewish lives with the Good News. 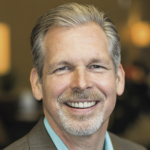